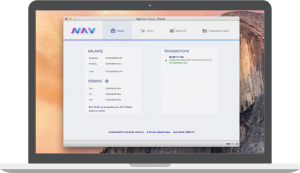 If you simply held onto your Bitcoin, Litecoin or Ethereum over the past couple of years, you would have made a handsome profit.  But did you know that there is a cryptocurrency that will pay you ~5% interest per anum!  It's called Nav Coin and here is why I think it could be interesting.

When you use the Nav Coin wallet, you will “stake” transactions and basically propagate consensus.  And when this happens (all under the hood obviously), you earn interest on your coin.

Cryptocurrencies such as navcoin have some big advantages.  Firstly, the speed at which transactions happen.  It's much much faster than on Bitcoin.  One thing that has really been bothering me recently with Bitcoin is just how slow transactions are.  And they are currently really expensive as well.  It's just not economical to use as an actual currency at the moment.

Because there is no complex algorithm solving needed to be done, Nav Coin is also environmentally friendly.  Bitcoin mining uses a lot of power.  A Nav Coin wallet can be run on any low end hardware.  Even a Raspberry Pi!

Nav coin is currently priced at around $1.10 – although this price fluctuates around.  I don't know where the price will go, and to be honest, although I hold a bit of Nav Coin, I'm more interested in it as a currency.  I would love to see something like Nav Coin take off more and be used to replace more and more fiat transactions.

That being said, it could also be an interesting investment for those looking to get into alt coins.  It has a solid foundation (it's built on the Bitcoin Core), an excellent user friendly interface (important for mass adoption) and has been under active development for 3 years.  There is a solid future road map, so Nav Coin could really take off big time.

You can learn more about Nav Coin here

Make Money with YouHodler: My Review

Money Making Skills You Can Learn during Lockdown

PopCash Review: How I Made Over $2.5kA Big PopCash Update and the Ultimate Cheatsheet.What is Dai and why you should be using itDoes Shorte.st Pay? They Sure Do