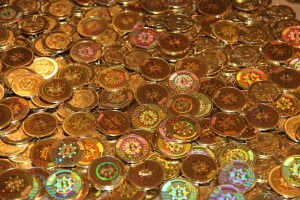 No one knows where the top of Bitcoin will be.  No one even knows what Bitcoin really is.  Is it the next Gold? Is it the rebuilding of the financial system?  Is it a currency?  Is it the most historic redistribution of wealth in history?  Because of these unknowns, no one can predict the price of Bitcoin.

But what I can do is share some pretty solid advice on investing that has worked well for me, and will help you make your decision:

Bitcoin will be volatile

I don't for a second believe that over the next 5 years, bitcoin will only ever increase in value day to day.  It's easy to get caught up in the hype.  This week, day on day, it's been gaining value.  Same can be said for week on week.  That won't always happen.    There will be weeks where Bitcoin loses value.  It could also face a major correction.

This has never worked well for Bitcoin investors, so odds are it won't work well in the future.  If Bitcoin does correct selling it for less than you paid will obviously guarantee you a loss.  Remain calm – it's done it in the past and it will happen again.

Don't think you can't cash out

Some people treat Bitcoin more like a religion.  But this isn't a religious blog – its about investment.  Don't be afraid to take some of your money off the table when the price is high.  It's ok to buy a new car or invest in some property 🙂   Remember why you invested in Bitcoin?  Was it just to see how high it could go, or was it to increase your wealth?  Cashing out is ok.

If you had invested $100 a week in Bitcoin every week over the past few years, you would have made a fortune.    You can set up regular Bitcoin buys on Coinbase.  This is a sensible and measured approach to investing in Bitcoin.

Never invest more than you can afford to lose

The golden rule!  I'm honestly ok with my entire Bitcoin portfolio being reduced to $0.  It's not going to have a massive impact on my finances.  It won't send me broke.  Sure some peopel have gambled their houses on Bitcoin and won – but that's a gamble you cannot afford to lose.  Don't be foolish.  It's easy to get carried away in the hype.

So am I still buying Bitcoin?

Yep.  That's just me.  I think it's got a long way to go.  It's sure going to be a bumpy road, but i'm still extremely bullish and actively buying.