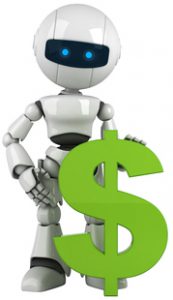 You've probably seen the popup ads which promise you can make guaranteed profits using a fool proof automated forex robot.  If it sounds to good to be true, it usually is.  So can you really make money from forex robots?

Robots offer the promise of sit back and relax trading while the “smart” robot calls all the shots.   The software is programmed to open and close trades when certain market conditions are met.

Do they actually work?

Probably not.  These robots come and go – if they actually worked, they would stick about.  There are plenty of services online which track robots and their profits.   I've never seen a single robot able to consistently make profitable trades on its own.  The reality is, a human is needed to make sense of fundamental economic forces which have the biggest impact on forex markets.

Have a look at some of the reviews for these forex products, and you'll soon see that people aren't able to replicate the results promised by the fancy sales pages.

If they really worked, why would the creator sell it?

If these robots really worked and could make the promised “thousands of dollars” every day, why would they creator sell it for a handful of dollars.  It just doesn't make sense.

Robots programmed to make trades, based on certain market conditions, and consistently tuned to match the traders style could possible work.  But these Expert Advisors as they are known, aren't sold on the market.  They are usually custom built by the trader themselves.

There will come a time when robots can trade just as effectively as humans, and there are some companies that are already doing it.  This is known as quantitative finance but the companies that are doing this spend millions and millions of dollars on building powerful computers and hiring the smartest people in the world to create the software.  They sure as hell aren't selling this stuff for $50 on some shitty website.

Stay away from forex robots

Don't fall for the scam.  Forex robots don't work.   Traders do use software in conjunction with their own trading intelligence, but there is still a human involved.   Forex trading takes skill and practice and sadly there are no easy shortcuts by simply using a robot.

The closest alternative that doesn't involve a scam would be copy or social trading.  This is where you copy the trades of an actual human, who does possess skill in forex or stock trading.   With social trading, everybody's trades are out there in the open and you can see there history.  Sure you aren't going to make $100k in the next 10 days from social trading, but it is possible to make a 10% return on your investment – better than losing all your money to a scam.

Start your own Forex Affiliate Blog